VIDEO:   montage of TV appearances during the Bush Years

How to Lose Your Job in Talk Radio 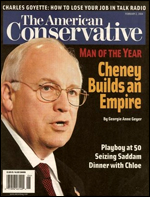 Imagine these startling headlines with the nation at war in the Pacific six months after Dec. 7, 1941: “No Signs of Japanese Involvement in Pearl Harbor Attack! Faulty Intelligence Cited; Wolfowitz: Mistakes Were Made.”

Or how about an equally disconcerting World War II headline from the European theater: “German Army Not Found in France, Poland, Admits President; Rumsfeld: ‘Oops!’, Powell Silent; ‘Bring ’Em On,’ Says Defiant FDR.”  It seems to me that when there is reason to go to war, it should be self-evident. The Secretary of State should not need to convince a skeptical world with satellite photos of a couple of Toyota pickups and a dumpster. And faced with a legitimate casus belli, it should not be hard to muster an actual constitutional declaration of war…

SPEECH: Transcript of a talk Charles gave on March 19, 2003, the night the Iraq War broke out.

I left my radio studio this evening to be here just as President Bush’s ultimatum to Saddam Hussein expired. The bombing of Iraq, which has been going on more or less continuously since 1991, at this hour assumes a new intensity, joined by helicopter gunship attacks, and a ground invasion. A headline in the foreign press—I have after all become accustomed to getting my news from foreign press—screams, “Expecting Iraqi Mothers Rush to Give Birth Before War! Baghdad: The sound of screaming filled the maternity ward at the Elwiyah Hospital on Tuesday, as women rushed to give birth ahead of an impending U.S. invasion. Many pregnant women demanded to have Cesareans rather than risk delivering their babies during war, even though they were sometimes well short of their natural due date.”

Under the circumstances, there is little reason for me to yet again marshal the arguments against war as I have been doing on my daily radio talk show. In any event, the rationale for the war that America wants has shifted so many times that one can hardly know which to refute…

Gold and Syria
We are confronting authoritarians with such an appetite for power that they become afraid to wield it for fear of losing it.  It is a subject fit for a Dostoevsky or Shakespeare.
– 9/6/13

Bubbles and Busts
We would feel better about Obama’s comments if there were any reason to think he has a clue about the role of the Federal Reserve in creating these bubbles and busts.
– 8/22/13

Currency Wars
History shows that when these import restrictions and trade wars accelerate, they can bring hot wars with them.
– 2/11/13

Trampled Underfoot
Like Alien vs. Predator, it’s an epic battle of powerful forces locked in combat.  Only this is a battle of economic forces…. Inflation and deflation are engaged in a titanic struggle.
– 6/29/12

Are the Central Bank Vaults Empty?
Something about the numbers doesn’t seem to add up.
– 10/6/12

Gold, Money, and the Parable of the Three Little Pigs
Our monetary history – and perhaps its future – can be told in the tale of the three little pigs. Except that this version of the story is in reverse and it comes with a warning…
– 5/3/12

If You Meet the Buddha on the Road
Once I have made the case in interviews and talk shows that our freedom and prosperity are at an inflection point, a host or listener will almost invariably ask, “What is to be done?”
– 3/22/12

Slip-Sliding Into Tyranny: The New American Way
Pay close attention. This is how it happens…
– 1/12/12

The Command Economy
The command economy is not the exclusive province of either the left or the right, Republican or Democrat, Communist or Fascist, Stalinist or Nazi, Pol Pot, Mao, Chávez, or Ahmadinejad.  It is what they all have in common.
– 12/21/2009

INTERVIEW:
The Arizona Republic, March 17, 2012
Into the Mind of Charles Goyette

Q.   Who is most responsible for our declining freedom?

A.   The Republicans and Democrats and the people who vote for them. The assault  on our freedom is a trend that remains in force regardless of the party in  control.

ARTICLE:
The Campaign for a Sound Dollar
The Fed’s Real Agenda: Wealth Among the Ruins?
Unfortunately, when all the world’s currencies are in a race to the bottom, they are all likely to get there.
– 12/28/12