New York Times bestselling author and radio personality Charles Goyette, known for his outspoken libertarian views and his economic commentary, has been described as a fearless champion of liberty, peace, and prosperity.

Charles is the author of New York Times bestseller THE DOLLAR MELTDOWN and RED AND BLUE AND BROKE ALL OVER.  He is the co-author of THE LAST GOLD RUSH… EVER!

Goyette spent many years as an award-winning and popular Phoenix radio personality with America’s leading broadcast companies, including Pulitzer, Hearst Argyle, and Clear Channel.  Charles was widely known as “America’s Most Independent Talk Show Host,”  and was voted Best Phoenix Talk Show Host  by listeners who couldn’t get enough of his “Fearless Talk Radio.”

Charles has also been a participant in the national political debate as a popular public speaker and is often called upon to share his views with national televisions audiences, including Fox News, CNN, MSNBC, PBS, CNBC and Fox Business Channel. He has appeared often on popular programs like Fox and Friends, the O’Reilly Factor with Bill O’Reilly Fox News; Stossel with John Stossel and FreedomWatch with Judge Napolitano on Fox Business; NOW with Bill Moyers on PBS; and on Lou Dobbs Tonight on CNN, and many others.

He has written for a number of magazines including The American Conservative and Gannett magazines, and for LewRockwell.com, CNBC.com, WorldNetDaily.com, and TheStreet.com.

Charles Goyette is a U.S. Army veteran and a recipient of the Army Commendation Medal for meritorious service.  Goyette had long rejected the U.S. national security policy known as Mutual Assured Destruction or MAD, in which the civilian population of the U.S. was rendered defenseless as a matter of policy and held hostages in the nation’s nuclear strategy.  Before the election of Ronald Reagan, Charles became a supporter of a new defense policy to end the cold war standoff.  After Reagan’s election, at the invitation of Reagan advisor General Daniel O. Graham, former Director of the Defense Intelligence Agency and Deputy Director of the CIA and the originator of the Strategic Defense Initiative, Charles became a member of the national speakers’ bureau of High Frontier, the private organization founded by Graham to promote what became known as Reagan’s Star Wars defense policy. 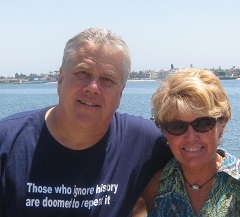 Beginning in 2002 with the lead up to George W. Bush’s elective war in Iraq, Charles Goyette found himself in a whirlwind of controversy and national attention for his outspoken opposition to the war.  Accounts of his experiences opposing the war while a talk show host for Clear Channel Communications, the nation’s largest owner of radio stations and a company that had close ties to Bush, are available online, including the transcript of a speech called Wartime Confessions of a Talk-Radio Heretic he made to an economics group the very night the war broke out in March, 2003, as well as an account he wrote for the American Conservative magazine called How to Lose Your Job in Talk Radio.

During the Iraq war, Goyette became a regular contributor of geopolitical radio shows, commentary, and interviews to AntiWar Radio, a service of the leading website AntiWar.com.

On a more personal note, Charles is a founding member of the Board of Directors and recent President of the Leonardo da Vinci Society for the Study of Thinking. The Society’s annual inductees include theoretical physicist Michio Kaku, creative thinking theorist Edward de Bono, physicist Fritjof Capra, inventor and futurist Ray Kurzweil, biologist Lynn Margulis, and lunar astronaut Edgar Mitchell.

Charles has completed a screenplay on the life of the famous American seer Edgar Cayce.