I hope you can make plans to join me at this year’s New Orleans Investment Conference, November 10 – 13.   This is the big kahuna of investment conferences and has been for almost four decades.   Among its featured speakers over the years have been F.A. Hayek, Barry Goldwater, Ayn Rand, Milton Friedman, Margaret Thatcher, and Sir John Templeton.

I’ll be speaking about crucial discoveries in economics that every investor needs to know.  I’ll also get to share a podium with Martin Weiss, Chairman of the Weiss Group, whose Weiss Research is the publisher of The Freedom and Prosperity Letter. 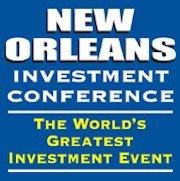 And later I will join Ron Paul and Washington Post columnist Charles Krauthammer for an important panel discussion on America’s future.

The New Orleans Investment Conference 2013 promises to be a rewarding event.  Not to mention the great restaurants, music, and historic flavor of New Orleans!  Make plans to attend if you can.