Are we on the brink of war? Academic sparks debate by drawing comparisons between 1914 past and 2014 present 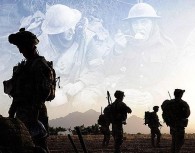 A century ago, a simple assassination was enough to topple a tenuous balance between the old and new worlds. The resulting war killed millions and spanned the globe. Is history about to repeat itself?

The year was 1914. The world was experimenting with economic globalisation.

But the concept proved to be in conflict with old notions of empire and fresh attitudes of expansionism.

There was friction between the industrial and military powers of the “old” world and the ambitions of the revitalised “new” economies.

Add a century to the date and ask yourself: does this scenario sound familiar?

According to Oxford professor of international history Margaret MacMillan, it does. Her essay addressing China’s recent flexing of its economic and military muscles has sent ripples around the world.

And she’s not the only one. Diplomats, academics, authors and journalists across the globe have reached the same conclusion.

And so has China.