Notes for the Fourth of July

For many years, I made it a practice each Fourth of July to honor the ideal of America and the people who brought it forth by studying some of the founding period’s history or by reading biographies of those who helped bring this ideal to life.

Of course my interest is in how America became a land of Freedom and Prosperity, because things could have turned out much differently. We could have ended up an extension of Europe: a land of imported royalty with a social order rigidly stratified by birth, not merit; a continent of petty princes and warring principalities.

But we did not. Our good 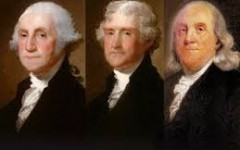 fortune was not inevitable, but depended on the appearance on the American stage of a most unusual group of individuals.

It is clear that the giants in the generation of our founders do not just appear larger than life in the rearview mirror of history. They were indeed remarkable men who became remarkable because they chose to make themselves so.

Benjamin Franklin, 70 when he signed the Declaration of Independence, was older than Washington, Adams, or Jefferson and already renowned at the time for his accomplishments….

– More at Money and Markets HERE